ISO 14644 is a standard for cleanrooms that was developed by the International Standards for Organization (ISO). The ISO has been in existence since 1947, after 65 delegates from 25 different countries met to discuss its future the previous year. They saw the need for a non-governmental body whose sole job it was to determine best practices for different industries. 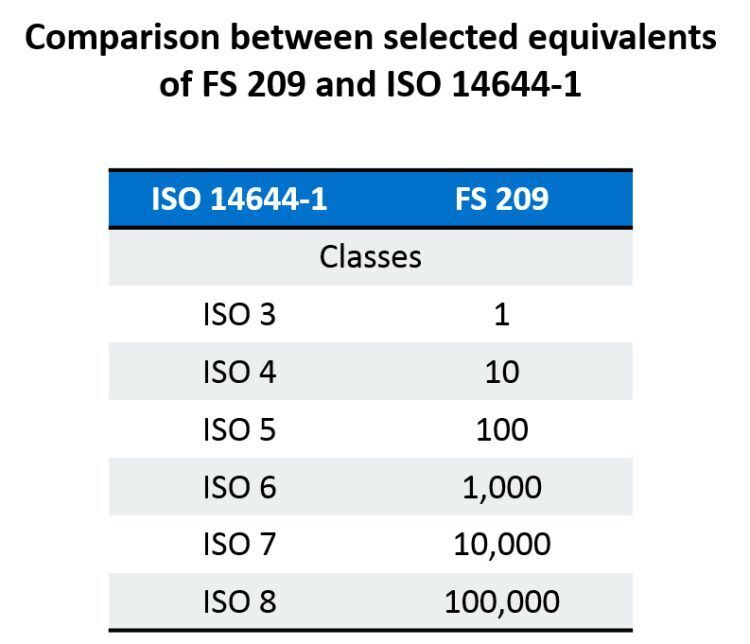 To this day, they do just that. And cleanrooms and contamination control falls under their umbrella.

While many countries have their own set of guidelines, rules, regulations, and classifications, ISO 14644 is considered the gold standard for cleanrooms internationally. Many countries’ guidelines build on, coincide with, or reference ISO 14644. This is because ISO 14644 is both exhaustive and informative. It goes into detail about what a cleanroom should look like, how it should be ran, and more. It is broken into 7 parts:

Part 2: Specifications for testing and monitoring to prove continued compliance with ISO 14644-1

This is the first part of ISO 14644 and the foundation of it all: ISO classifications. By maintaining this classification, you will communicate to everyone around you how clean your cleanroom is.

The second portion of ISO 14644 outlines the bare minimum requirements for monitoring your cleanroom. It places an emphasis on continuous monitoring, which allows for a better over-all picture of a cleanroom’s cleanliness, versus the occasional monitoring favored in some cleanrooms.

To develop a monitoring plan, ISO 14644-2:2015 also dictates having a strategic risk assessment.

In the third portion of ISO 14644, you will find the requirements for testing methods that support your cleanroom’s operation and cleanliness levels to maintain your classification. These test methods are based on your airflow strategy. There are two types of air flow specified: unidirectional and non-unidirectional.

You will also need to test in three states: as-built, at-rest, and operational. This section defines those states, recommends different tools to test with, and exactly how to conduct the procedures. If you wish to classify and maintain that classification, you will need to follow the testing methods put forward in this section.

You will notice that the most recent version of the 4th part of ISO 14644 is actually from 2001. It specifies how you should design and construct your cleanroom. True contamination control starts at this level, thus it is incredibly important to be familiar with this section. This section provides those guidelines, along with start-up and qualification requirements.

If you are an operational manager, the fifth section of ISO 14644 is for you! It outlines how to plan the use and operations of a cleanroom.

This is a rather broad section, as it is meant to be used in a number of industries. Thus, you should also be familiar with your particular safety needs in your cleanroom, as well as national and local safety regulations.

It references ISO 14644-2 and ISO 14644-3, but does not cover them in detail. To make the most of this section, you should also be familiar with those.

The sixth portion of ISO 14644 is very straightforward: it defines the vocabulary used in the guidelines.

Depending on the industry, ISO 14644-7 will be interpreted differently. The term “separative enclosures” broadly refers to a multitude of configurations. This could include air hoods, gloveboxes, isolators, and mini-environments. These are contraptions that put a barrier between the human and the contents. They provide varying levels of protection through physical or dynamic barriers. They could also require a special atmosphere.

These are typically structures within a cleanroom: not a separative environment. They could be mobile or a fixed space in the cleanroom. They have a variety of uses. Thus, this section must be very wide reaching in its definitions.

In general, ISO 14644-7 defines “the minimum requirements for the design, construction, installation, test and approval of separative devices, in those respects where they differ from cleanrooms as described in ISO 14644-4 and 14644-5.”

Just like with GMP Annex 1 and other guidelines and regulations, we can expect for ISO 14644 to be updated in the future. This will naturally occur as we continue to learn and develop new technologies.

So how can you stay on top of updates?

In our Knowledge Center, we break down complex topics into easily digestible white papers, articles, videos, and more. We also keep our subscribers up to date and informed on the latest developments in the cleanroom and contamination control world!

★ Other Articles Of Interest To You: